The export price of Chinese caustic soda remained at relatively low levels for many years, even below US$350 from 2020 to the first half of 2021. But, following the Chinese government’s implementation of the Dual Control Policy in September 2021, export prices quickly increased to around US$600/ton.

An immediate knock-on effect of the policy was a drop in Jiangsu producers' operating rates. The drop was from around 90% capacity in early September 2021 to 20-30% later that month. Only after October 2021 did Chinese caustic soda production gradually return to normal.

Along with the US, China is among few countries where chlorine market transparency allows identification of prices. And, as the graph shows, caustic soda and chlorine prices have tended to move in the same direction these past 10 years. There was a marked surge and fall in pricing from late last year. 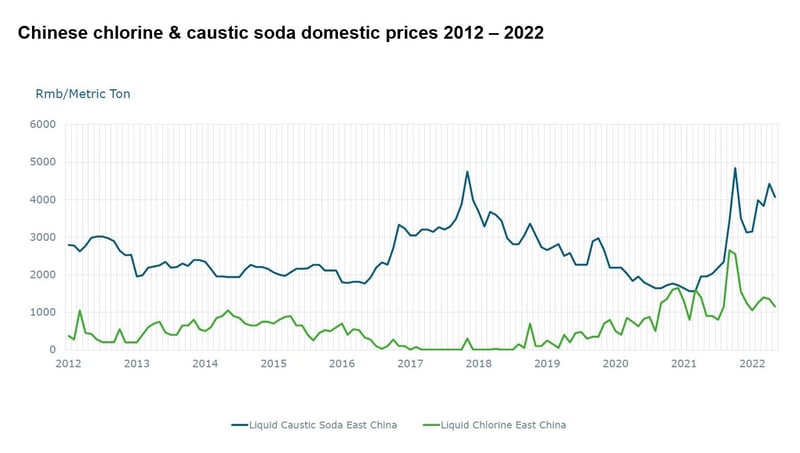 And in the first four months of 2022, China’s liquid caustic soda exports have already more than doubled compared to 2021. But the export volume of solid caustic soda decreased. Australia remained China’s largest export destination over the past six years. It is worth noting that the export volume to Indonesia in 2021 was 10 times that of 2020 and, though India imported caustic soda from China from 2016 through to 2020, the country imported none from China in 2021.

Alumina is the largest application for caustic soda, closely followed by Pulp & Paper. However, China's textile producers increased production in 2020 and 2021 due to the backflow of overseas orders. However, the Omicron wave of the Covid-19 pandemic and Southeast Asia's recovered textile production may intermittently bring uncertainty to China's textile industry going forward.

The total production of machine-made paper and paperboard 2021 was 136 million tons, 7% higher than that of 2020. In fact, a new paper plant comes onstream in the south of China in H2 2022, compounding what will be overall growth in the country's paper industry for this year. 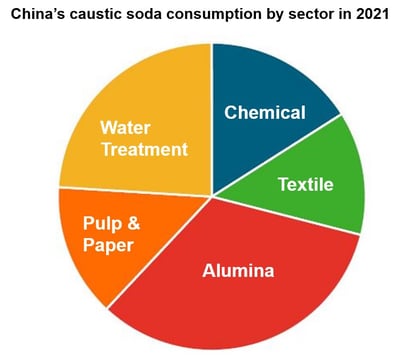 The total production of synthetic detergent in 2021 was 10 million tons, 7% lower than in 2020. It is estimated that the production of synthetic detergent in 2022 will be similar, or slightly lower again. It is also estimated that caustic soda demand in China will continue as is or increase in the next few years with economic growth.

Demand from the paper and chemical sectors – and from emerging industry – is likely to increase while demand from alumina is likely to be relatively limited due to environmental production policy impacting the sector's production rates detrimentally.

Total caustic soda consumption in China in 2021 was 37 million tons. It is estimated that 2022 consumption will slow to just a slight year-on-year increase. The graph below (left) shows estimated supply and demand on quarterly basis. Operating rates of Chinese caustic soda producers decreased to around 60% in October of last year due to the energy consumption control policy. This lowered China's operating rates for Q4 2022, though the control policy appears to have eased this year which will likely lead to operating levels of around 80% in 2022.

New caustic soda capacity is due onstream in China in H2 2022. There were hold-ups to planned expansion due to the government's zero-covid measures as well as brands' shifting schedules in some cases. In 2021, Chinese caustic soda production exceeded 38 million tons, 6 % higher than 2020 in spite of the pandemic. That growth was supported by capacity expansions and consumption flows.

Overall caustic soda production is expected to be around the 40 million tons mark, according to estimates. Export volumes for liquid caustic soda in 2022 are expected to be relatively high due to weaker demand within China but increasing demand from Southeast Asia, the EU and Ukraine because of the Russian invasion of the latter sovereign state. As for China's chlorine capacity, this has been slowly increasing from 2016 and may reach 41 million tons by the end of 2022.

This blog post is inspired by the presentation in the video below. It was among Tecnon OrbiChem's contribution to the Chlor-Alkali in 2022 webinar event held in June and co-organised with our partner ICIS.

To access Li's full presentation, go to our simply fill in the MARKET INTELLIGENCE & DATA INSIGHTS form at the bottom of this Tecnon OrbiChem blog post and you will receive an email with a link to our e-Book.