Compelling concepts to kick off a sustainability conversation

Cellulosics are increasingly finding their way back into the global textiles and fibre markets as reliance on fossil-based feedstocks begins to wane in favour of renewable resources.

That change is taking place over a century after Henry Ford unveiled a prototype of the Model T vehicle made from a biobased composite fibre bodywork.

In a striking analogy to a predicted global steel shortage underpinned by Russia’s ongoing invasion of Ukraine (which we've covered extensively from a supply chain perspective in prior blog posts), steel supplies in the US were impacted by war as Ford finalised his prototype.

Conscious of the problems this would impose on vital value chains, Ford looked to natural resources. However, the precise composition of his prototype remains in question given the lack of documentation beyond journalistic interpretations of the day. 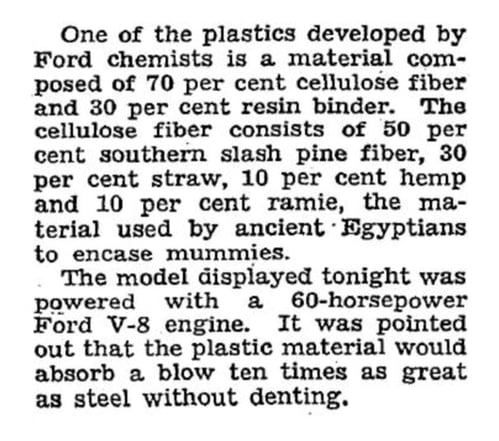 Despite that soy, pine, hemp and ramie – a cellulose fibre made from the stalks of the Chinese nettle plant and used to encase Egyptian mummies – remain plausible candidates. In recent years, BMW and a number of carmakers introduced cellulose-based materials to production lines, mainly to reduce the overall weight of their products. In textiles, cellulosics is the fastest growing fibre group – as explored in our blog post Cellulosic fibres: A world of opportunity earlier this year.

Another fascinating innovation Tecnon OrbiChem explored in an earlier blog post Renewable materials and the future of plastics is batteries made from wood. Lignode is Stora Enso’s lignin-based carbon material for electric vehicle (EV) batteries. The Finnish firm invested €10m in a plant to advance technologies aimed at EV, consumer electronics and large-scale energy storage markets.

' Justin Kirrchher's contribution Bull**** in the Sustainability and Transitions Literature: a Provocation is a very entertaining and well written article...'

With millions of tonnes of lignin produced in Europe alone and circulating in the pulping process, ‘Stora Enso [can] extract more and more of that,’ she says. ‘What is a wonderful thing about this is when we do the extraction, we're not increasing the number of trees that we use, but we put more value at it.’

An exceptionally strong fibre formed in the mammary glands of genetically modified goats was successfully commercialised as an adhesive in 2018 – and offers scope in wound care and in vivo applications.

Developed by Utah State University’s Professor Emeritus Randy Lewis, it went on to win a million dollar US Department of Defence grant (alongside a number of other spider silk-inspired innovations explored due to its stretch and strength properties).

He noted that while attempting to spin those proteins into fibres, the glass syringe he was using glued together in an unbreakable bond. That finding led to the development of a glue he claims outperforms many on the market.

Products built on the technologies discovered in Prof Lewis’s lab are marketed by the firm Spidey Tek - where Lewis is chief scientific officer. The technology made it into a storyline for the fictional crime series NCIS.

Scale up limitations around spider-goat technology, however, caused Jones to shift his lab’s current research focus to alternative biomaterials.

Firstly, focus moved to silkworms and now he and his team are probing the proteins in the slime of hagfish. What is interesting about hagfish is the reinforced film it exudes when in danger – a film that clogs the gills of attacking fish - is capable of expanding 30 thousand times its original size when inside the hagfish.

Prof Jones says the filaments are very strong. 'They're called intermediate filaments. And when you isolate them from the slime, you stretch them and allow them to dry, they have very nearly the mechanical properties of spider silk.’

There’s something about fish scales and vision

Electronic device displays could be made from fish scale-based plastic in the future. A team of researchers from Institute of Advanced Materials, Nanjing Tech University, China created an extremely thin film from extracted fish scale gelatin. The innovation is described in the journal of the American Chemistry Society, ACS Nano.1

According to the US Food and Agriculture Organization, world per capita fish consumption more than doubled between 1961 to over 20kg in 2015. Much of the scale components ends up in landfill.

The film dissolves in warm water at its end of life. Biological materials including cellulose from cotton fibres and silk protein from silk worms are being explored for similar purposes.

Another fishy idea is the use of Fish morts – fish that died during fisheries activity – as low-cost feedstock for anaerobic digestion – a technology described by Tecnon OrbiChem’s biomaterials expert Doris de Guzman in a post on her Green Chemicals Blog previously.

In fact, the co-existence of synthetic innovation and nature is a subject de Guzman elucidated further in this interview – A window into the future of biotechnology – with Bio Market Insights TV’s Paul MacDonald earlier this year.

And if you thought that only Smurfs could live in mushroom homes, think again. A showhome built almost entirely from biomaterials including mycelium, seaweed, straw and vegetable fibres is currently on display in The Netherlands. And it isn’t the only one to have spawned in the minds of Dutch designers.

Some years back, architects 3D-printed and constructed an eight-square-metre urban cabin using a linseed oil-based filament developed in collaboration with Germany-based Henkel’s adhesive technologies experts. The material is entirely recyclable and can be shredded for re-use when the dwelling is no longer required.

And finally, mind your sustainability language

A paper aimed at any reader seeking to claim studiousness in sustainability issues popped up in the Springer journal Circular Economy and Sustainability this week. And let's face it, Environmental, Social and Governance (ESG) practice is becoming increasingly important in today's business world.

Aptly entitled Bull**** in the Sustainability and Transitions Literature: a Provocation2 its author Julian Kirchherr says up to half of the articles now being published in many interdisciplinary sustainability and transitions journals may be categorised as ‘scholarly bull***’.

Described by Tecnon OrbiChem founder and senior advisor Charles W. Fryer – who has a number of letters after his name – as ‘a very entertaining and well written article’.

'Many a truth written in jest,’ Fryer adds. And, since Kirchherr published his sustainability insight in a scientific journal, there’s a 1 in 2 chance he's hit the nail on the head we suppose...

RENEWABLE MATERIALS AND THE FUTURE OF PLASTICS