As a result, total export volumes from the continent have steadily declined since 2018, when a record high of 4.6 million odmt was reached. Over the past decade, Chile has been the most significant exporter in Latin America. However, the country reduced shipments in 2021, while Brazil and Uruguay increased their shares of the continent's wood chip supply for overseas markets.

In 1Q22, shipments from all three exporting countries—Brazil, Chile, and Uruguay—were up QoQ, with the total volume reaching a two-year high of close to one million odmt, reports the Wood Resource Quarterly. Both Brazil and Uruguay were close to record highs, while Chile shipped substantially less than its quarterly average volume for the past ten years. Despite increased shipments from Chile in 1Q22, the total volume exported was the second lowest in almost a decade. Practically all exports over the past decade have been to China and Japan, the latter historically having been the largest market. However, over the past few years, China-bound shipments have grown from 27% of total exports in 2018 to 53% in 1Q22.

Over time, Latin American hardwood chip export prices have fluctuated depending on prices for market pulp (HBK) and the tightness in woodchip supply in the Pacific Rim region. Prices peaked in early 2019 when wood fiber demand in China and Japan was high and wood chip supply from Australia and South Africa was tightening. However, since their high three years ago, prices have trended downward and averaged $135/odmt (FOB) in 1Q22 for wood chips shipped to Asia. This level was below their 10-year average. In early 2022, export prices in Uruguay were about $25/odmt higher than in Brazil and Chile. 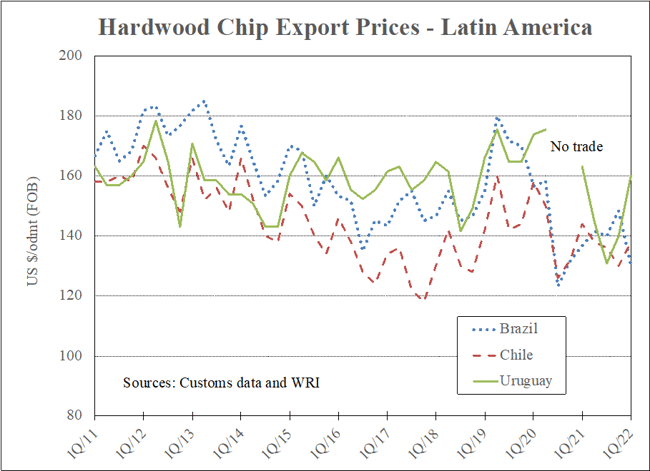 Are you interested in worldwide wood products market information? The Wood Resource Quarterly (WRQ) is a 70-page report established in 1988 with subscribers in over 30 countries. The publication tracks prices for sawlog, pulpwood, lumber & pellets and reports on trade and wood market developments in most key regions worldwide. For more insights on the latest international forest product market trends, please go to www.WoodPrices.com