What is BRP and How Will It Impact the Future of the P&P Industry?

Unbleached recycled fiber market pulp, also known as brown recycled pulp or BRP, is a new grade of market pulp that didn’t exist before 2017, but is expected to be a hot raw material in the Pulp and Paper industry within the next couple of years. BRP is produced using recovered paper that has been processed through state-of-the-art stock preparation systems, formed, dried and then shipped in bales or rolls. The material uses fiber from roughly 70-100% old corrugated containers (OCC), with mixed paper (MP) making up the remainder. It can be used as a replacement for traditional recovered fibers in the production of containerboard.

Most of the current demand for BRP is coming from China as producers look for alternatives since its global ban on recovered fiber was implemented. Despite the ban, China’s containerboard demand has continued to grow and as a result, imports of unbleached kraft pulp (UKP) have increased in the short-term to meet raw material needs, as well as containerboard imports from other Asian countries.

However, a long-term solution for a low-cost fiber is necessary, thus BRP has entered the market. In Figure 1, we can see that US exports of OCC to China have dropped to nearly nothing. However, total OCC exports from the US have remained fairly constant due to other Asian countries increasing their volumes. 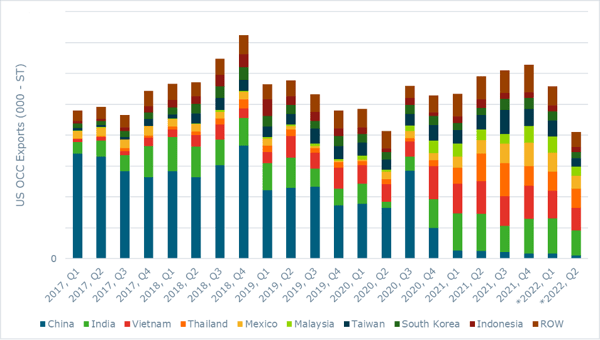 As of now, the majority of BRP is currently being produced in other Asian countries. However, the US also intends to get in on the action in the near-term. Celadon Development Corp., a joint venture partnership of Kamine Development Corp. and Nicollet Industries, announced its plans in November 2021 to invest more than $155 million in a recycled brown pulp facility in Savannah, Georgia. The plant is expected to produce 450,000 tons per year of recycled fiber pulp during phase I and 900,000 tons per year after the completion of phase II. Thereafter, the company expects to export about 87,000 20-foot equivalent units of finished products annually. Celadon also announced its plans for another facility in Chesapeake, VA at the beginning of 2022, which is expected to be up and running by 2024.

With the emergence of BRP to serve China’s containerboard producers, some questions to consider include:

Since BRP is a newly developed grade of market pulp, the degree to which this could impact the industry and all major players has not yet been fully determined. For a deeper look into the possible future of BRP and to stay on top of any news surrounding this topic, talk with an expert at Fisher International today. You can also learn more about how Fisher International’s analytics platform, FisherSolve, can provide you with detailed information on every paper and pulp mill in the world for both market and competitive analyses.

Recycled Fiber Price Benchmark: What Is It and How Does It Work?

Recycled Fiber Price Benchmark: What Is It and How Does It Work?

Analyzing the US OCC Supply Curve