FBB vs SBS: What Will Demand Look Like in the Next 5 Years?

Cartonboard has experienced significant growth over the last couple of years. It currently makes up about 17% of the global paper and board market – the second leading grade behind containerboard. The consistent growth within this sector is due to a combined result of a number of factors such as the economy, urbanization, population, sustainability concerns, and government policies and regulations. As we can see in the image below, cartonboard capacity experienced a substantial increase in 2021 (+5% YoY) and 2022 (+3% YoY), with an even more impressive increase expected to occur in 2023 (+8% YoY). 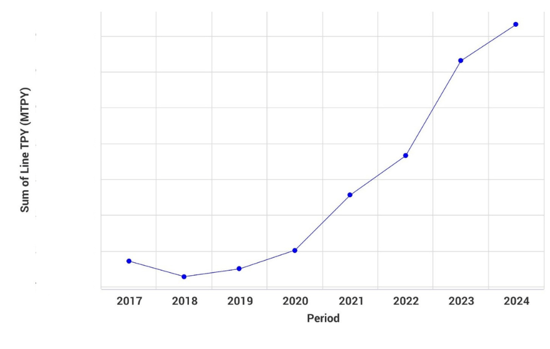 As mentioned earlier, there a number of combined factors at play contributing to the annual growth of cartonboard. One major factor is the growth and popularity of frozen foods. Frozen food has been a pandemic powerhouse and growth already outpaced total food and beverages in the three years preceding the pandemic. In 2Q of this year, the frozen food category experienced another surge amid increasing inflation – outgrowing the fresh food category by 230% at that time.

This trend has created a great opportunity for companies that produce the paperboard used in frozen foods packaging as demand has significantly increased. SBS and SUK, both virgin fiber-based grades, are the preferred paperboard grades for frozen food packaging due to their wetting resistance and superior stiffness.

However, CRB has also been gaining wider acceptance amongst consumers due to the growing preference for recycled-based packaging. Production capacity for SBS, coated SUK and CRB has increased as more consumers continue to purchase frozen meals.

Another major factor impacting the growth of cartonboard is the increased consumer awareness about excessive plastic pollution and its hazardous effects to the environment. We are beginning to see more countries begin to impose bans in an attempt to significantly reduce plastic pollution. For example:

This means that we will see a significant increase in cartonboard demand as paper food-grade containers and paper cups replace plastic over the next several years.

Today, however, we are going to focus on FBB and SBS and discuss the differences between the two as well as its potential future.

What Is the Difference Between Folding Box Board (FBB) and Solid Bleached Sulfate (SBS)?

The main difference between FBB and SBS is that FBB is always multi-ply and utilizes a combination of chemical and some form of mechanical pulp (MP) or thermomechanical pulp (TMP). Whereas SBS can be either single or multi-ply board but is always comprised of 100% chemical pulp.

The leading regions of FBB include Europe, South America and Asia. It is also India’s primary packaging substrate used by businesses.

SBS is purely constructed of bleached chemical pulp with a coated top side that creates excellent printing characteristics with moderate strength. These boxes are popular with most industries and used to package:

North America is the leading region for SBS production, and over half of the world’s supply of SBS comes from North America and is used for packaging retail products.

What Does the Future of FBB and SBS Look Like?

As we can see in the image below, FBB is the fastest growing global cartonboard grade with a 24% increase YoY in 2023 to kick things off. This is a big and recent shift considering it was only the third leading cartonboard grade this year.

FBB is experiencing such significant growth due to many of the factors previously identified, i.e. increased frozen food demand and plastic substitution. However, it’s also important to note that $1.5 billion of investment is flowing into North American cartonboard production – with some of that going towards FBB production.

North American bleached paperboard capacity has been flat to declining for the last decade. As noted earlier, the US is one of the few markets that heavily focuses on producing SBS. However, in December 2021, Swedish pulp and paper manufacturer BillerudKorsnäs AB (now referred to as Billerud) announced its acquisition of North American coated papers producer Verso Corporation. Since demand is decreasing for SBS, as many of the assets used to produce the grade are older and have higher costs, Billerud is currently planning to convert the Escanaba mill into a scale-size FBB mill, with the first machine expected to be converted by 2025 and another by 2029. 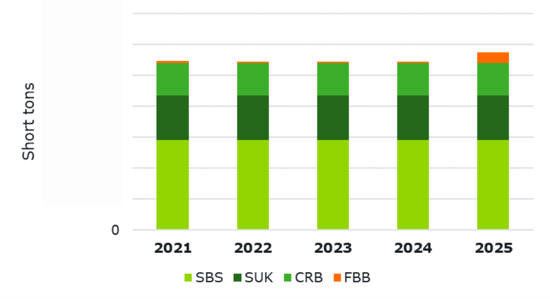 However, on November 10, 2022, Sappi North America announced the approval of a $418 million capital project to convert its PM2 (a coated freesheet machine) at its Somerset mill in Skowhegan, Maine to increase its capacity and produce SBS products. The planned project at the Somerset mill is slated to come online early in 2025. As we discussed earlier, with the increased awareness about excessive plastic pollution, Sappi’s goal is to pursue the growing area that is plastic replacements, and SBS is a more environmentally sustainable alternative to plastic packaging.

After looking into the cartonboard market and some of the different announced investments, a number of questions arise, such as:

For a deeper look into answering the questions, talk with an expert at Fisher International who can help your business formulate an actionable plan with a high degree of accuracy.

You can also learn more about how Fisher International’s analytics platform, FisherSolve, can provide you with detailed information on every paper and pulp mill in the world for both market and competitive analyses.

Pirita Huotari has over 10 years of paper industry experience in the global business environment across sectors such as development, sales support, project management and consulting. At Fisher, she has been supporting users of our FisherSolve platform with strategic use of market data and creating insightful analysis for Fisher’s strategic consulting team for over 6 years.

Where Does Africa’s P&P Industry Stand and Where Is It Headed?