As we noted in a 2021 post on this topic, population growth in the US South has exploded over the last few decades and the trend continues to impact timberland owners throughout the region. The South’s population has grown by 11% since 2010 and the region is now home to nearly 127 million inhabitants – 38% of total US population, and more than double the population of the Northeast.

The southward exodus isn’t likely to slow anytime soon, as one of the cascading impacts from the Covid pandemic has been more Americans fleeing high-population urban centers for more sparsely populated (and affordable) options. A 2022 report by United Van Lines notes that five of the top 10 relocation destinations in 2021 were Southern states.

This growth presents a number of challenges for Southern timberland owners who were once many miles from anyone. They are increasingly impacted by the perpetual sprawl that is bringing new housing developments, schools, and shopping centers to their backyards. Land use change and urbanization in particular are potentially powerful influencers on forests, and this kind of unbridled growth will continue to apply pressure to regional forest resources and make forest management increasingly difficult.

Why Continue to Grow Timber?

While Southern timber prices have increased over the last year, they remain at low levels compared to historical trends and many southern timberland owners (particularly non-industrial private forest [NIPF] owners) are asking the obvious question: Why continue growing timber at all?

This is a fair question given the confluence of events that have unfolded across the South since the 1990s, when planting pine trees was seen as a profitable long-term investment and the outlook was optimistic. However, no one could have foreseen the economic fallout from the tech bubble that burst in 2000 and the total economic collapse that then transpired in 2008, which resulted in a number of structural changes across the forest products industry.

Total pine sawtimber inventory and harvested volume have increased at similar rates in the South but growth still outpaces removals by roughly 82%, creating a surplus of pine logs that accumulated during the Great Recession and its aftermath. It is the sale of this pine sawtimber that drives southern timberland owner returns, and low prices have been the norm as excess inventory has limited an upside price correction and will continue to do so for years (though intense harvesting and competition will occur in local markets). 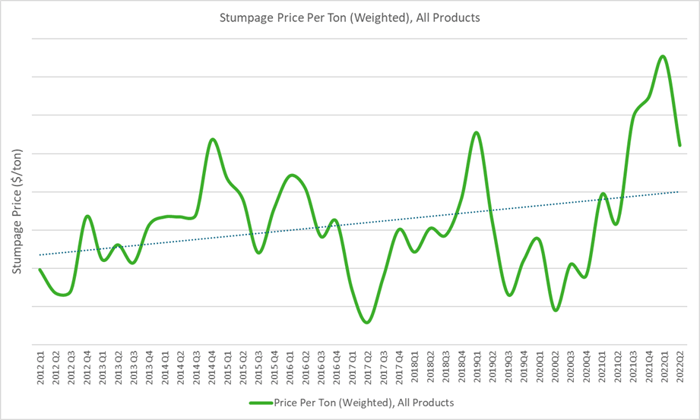 Current conditions are challenging for landowners, but it’s important for timberland owners to focus on the long-term goal: sawtimber. This is a “tried-and-true” product, and demand is stable. In the longer term, new capacity in the form of both greenfield mills and existing mill expansions will increase demand for pine sawtimber throughout the South. The region has steadily added over 3 billion board feet (BFF) of new softwood lumber capacity since 2020, and over 4 BBF of additional capacity is scheduled to come online by the end of 2024. While there are a lot of variables at work in a highly uncertain market, this new demand should apply upward price pressure on pine sawtimber in time.

In the meantime, however, there a number of creative ways for timberland owners to incrementally increase cash flows during and in-between harvests. A broad overview of some of those options is presented below, although it’s important to remember that every market is unique and access, availability, prices, etc., may vary significantly between states, wood basins, and even counties.

The most valuable trees on managed pine timberland throughout the US South are “pole” trees, which are converted to utility poles for telephone and power lines, or pilings for docks and piers. It takes a special tree to check all the boxes that will qualify it as a pole tree; it must be tall, straight and sturdy with an even thickness and free of defects like scars and knots that could penetrate the wood. While landowners can’t simply grow an entire forest of poles, a trained forester can help them identify the top candidates in their timber stand, and the effort is generally worth the hunt. Stumpage prices for pole trees throughout the South have consistently been in the $41-$46/ton range over the last several years.

As the forest products industry has evolved over the last decade, new markets for pulpwood have emerged that will continue to drive demand for this resource in the future. While pulpwood sales are not the primary motive for thinning, demand for pulpwood results in incremental cash flows for timberland owners. Three demand trends to watch include: 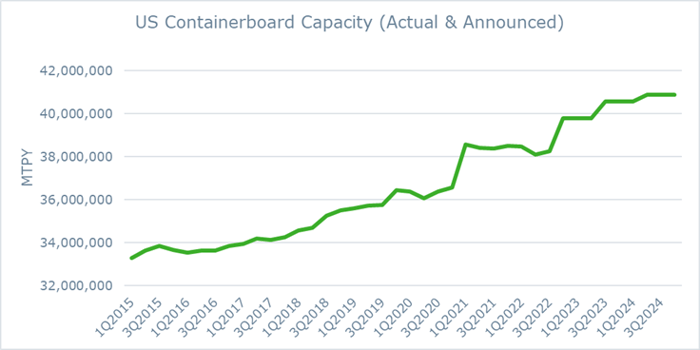 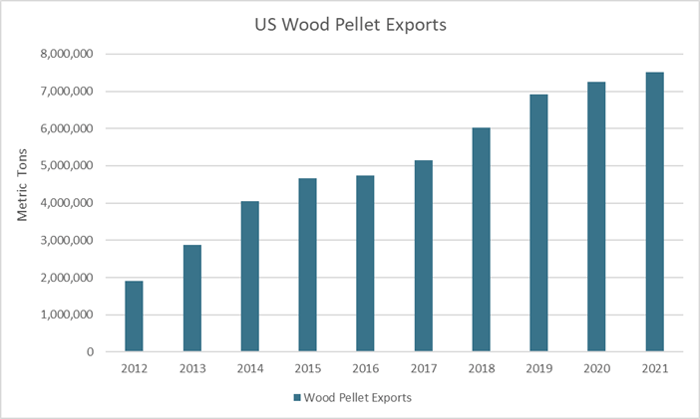 Fluff Pulp: High-quality fluff pulp is an absorbent material made from bleached softwood cellulose fiber that is used globally in a variety of applications such as feminine hygiene products, baby diapers and adult incontinence products. This is a relatively small market, but 2021 capacity increased 7% YoY and worldwide demand is increasing at 4% annually. While customer preference has not changed the total demand for wood raw material in this case, demand has shifted from one product to another – in this case, pine pulpwood fiber.

Pine pulpwood demand varies by market, but these three sectors are providing sustainable outlets for landowners. While seasonal impacts (prolonged wet weather) can also temporarily drive prices higher, there is significant volatility in pulpwood stumpage prices between markets, which can range from $3/ton in low-demand areas to as high as $30/ton in high-demand areas.

Pine straw, which is a natural product used in commercial and residential landscaping throughout the South, can help forestland owners earn additional income. “Pine straw” simply consists of the needles that fall from pine trees, which can be raked, baled, and sold to retailers, wholesalers or landscapers who use it as ground cover. In Georgia and North Carolina, pine straw has grown into a $50 million industry annually. The amount of pine straw produced on a stand of timber depends on several conditions, and not all stands are conducive for harvesting this material. Like any forest raw material, prices vary by region, but pine straw suppliers may pay up to $150 per acre for the right to harvest fallen needles on managed timberland.

Forest landowners are starting to see financial opportunities arise for the important work their forests perform in sequestering carbon. Markets are emerging that pay landowners to increase or retain carbon in their forests via continuous tree growth, paid by companies that either must - or want to - offset their own carbon emissions.

While forest carbon markets are still young, there are now two major markets in this area:

Both markets require a detailed inventory of each registered forest to determine how much carbon is present, which is then used to model future forest growth and estimate how many credits (and how much money) can be generated by the forest. Due to the way most voluntary market transactions are structured, forest landowners are able to continue to harvest the annual growth of their ownership, which can be a few tons per acre per year.

It is not (yet) economically viable for all properties to pursue carbon registry; the costs of developing a project are roughly fixed regardless of tract size. Project developers struggle with any ownership that is smaller than roughly 2,500 acres (this can vary by geography – the key limits are really the volume of carbon in standing timber and the annual growth) and for other landowners, the restrictions are simply too burdensome to accept. However, for landowners with a long-term vision to grow and harvest sustainably, this may present an opportunity for additional revenue. It’s also important to keep in mind that these markets are really in their infancy, and the popularity of this topic is sure to drive new innovation and opportunities for landowners in the coming years.

Hunting leases for private timberland owners have become increasingly popular and profitable throughout the South as land use changes continue to encroach on wildlife populations. The market for hunting leases varies widely by location and land condition, but market rates typically range between $3 - $10/acre per year, and some premier properties can fetch as high as $15/acre. A timberland owner with 1,000 acres of desirable hunting terrain could earn an additional $10,000-$15,000 annually by simply leasing his land to hunters.

“Surface rights” provide timberland owners the right to use their land for commercial, agricultural, and other surface-level purposes. “Mineral rights,” on the other hand, allow owners to take advantage of any natural resources that might lie beneath the land surface, including resources like mineable rocks, salts, limestone, metals/ores, and fossil fuels like oil, coal, natural gas, etc. Timberland owners with extensive holdings and diverse underground resources can sell the mineral rights to their land to generate additional annual income.

There are several federal and state voluntary programs that provide cost sharing payments that reimburse landowners for various timber management activities. For instance, the Wildlife Habitat Incentives Program (WHIP) works to financially assist landowners in the restoration and protection of endangered species. WHIP is available in all 50 states and has enrolled nearly 11,000 landowners totaling 1.6 million acres since it was launched in 1998. Eligibility is limited to privately owned, federal, tribal and government lands (limited) and once approved, land management plans are designed with one of two primary goals:

To explore other federal and state incentives, timberland owners should meet with a consulting forester, a state forestry representative, or a local USDA Natural Resource Conservation Service (NRCS) office to determine what programs are available and how they might benefit. These are valuable programs that can help landowners offset the costs of reforestation, property improvements, and wildlife management practices.

For southern landowners who have made the long-term investments necessary to significantly improve forest productivity and increase inventory on a stable land base, these smaller, creative markets have opened up new opportunities for their timber as well as the timberland itself. Unlike some other forest markets that have experienced stagnation or contraction in recent years, the South is one of the hottest industry destinations on Earth, which is good news for southern landowners. The region continues to attract new forest industry investment, which will drive an increase in demand for its timber resources.

While this new capital might not be enough to drive the kind of price spike many have been hoping for, it will be sufficient to drive slight upward price pressure while strengthening a sustainable, healthy, and diverse market.

Sowing What You Reap: Replanting After a Timber Harvest

How Much Money is an Acre of Timber Worth?

How Many Tons of Wood are on an Acre of Land?