Australia’s combined annual exports of hardwood and softwood woodchips for the year-ended September 2022 were recorded at 5.723 million bone dried metric tonnes (bdmt), 11.6% higher than the prior year. Average monthly export volumes have trended upward since ‘confidentiality’ restrictions were introduced in the middle of 2020.

Australia’s entire woodchip export trade, including both hardwood and softwood, is still masked by confidentiality restrictions, declared as ‘No Country Details’ (NCD). As such, no formal export data is available, only the monthly total volume and a total average price are reported by the Australian Bureau of Statistics (ABS).

Hardwood chips, make up the bulk of Australian woodchip exports. Their annual volume increased 9.9% across the year to total 4,666,757 bdmt.

Softwood chips continued strong growth. Softwood chip exports were up 19.8% compared to the prior 12 months, to total 1,056,598 bdmt for the year-ended September 2022. The large rise in softwood chip exports is driven by the inability to export logs to China. Chipping has proven to be a continually reliable option for utilizing that resource. China is also facing a shortage of recovered fiber which has also driven demand for woodchips. These two factors have allowed Australian softwood woodchip exports to climb.

As we remind subscribers each month, exporter attempts to mask the destination of hardwood chips are reflected in the chart below, which shows nearly all exports currently recorded as ‘No Country Details’. The chart displays total exports on a monthly basis. 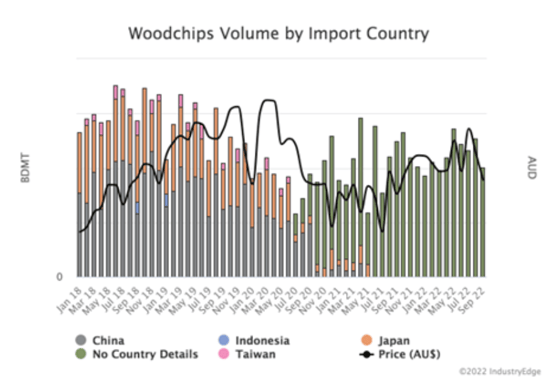 Examined month-on-month, September 2022 saw monthly exports decrease. Combined exports of Hardwood and Softwood were recorded at 400,325 bdmt in September, (325,740 bdmt Hardwood, 74,585 bdmt Softwood). As discussed earlier, 99% of Australia’s total chip exports are now declared as ‘No Country Details’, with only the monthly total and an average price reported.

Based on our monitoring of ship movements, we anticipate October’s export volumes will increase to 575,329 bdmt, with twenty-one vessels having left Australian ports during October. We project November’s exports will then drop back to 478,569 bdmt for the month.

As this edition of Wood Market Edge was being finalized, IndustryEdge’s vessel tracking observes twenty-one vessel departures anticipated during October.

Australia’s average export price for Hardwood chips was down again in September 2022, averaging AUDFob199.85/bdmt. For Softwood chip exports, the average price increased during September to average AUD218.82/bdmt. As described earlier, no port level data is available for shipments to Japan and China due to confidentiality restrictions, so we are unable to report port level prices at this time. 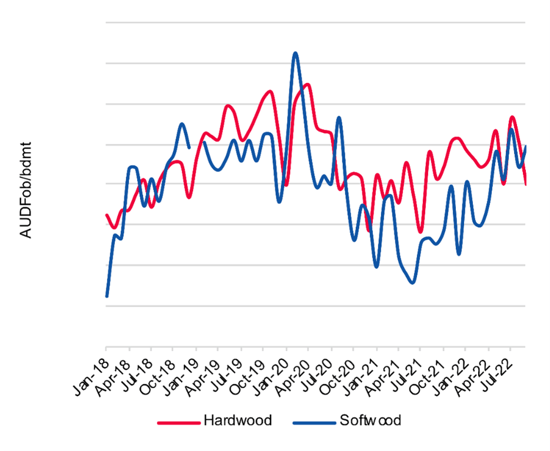 *From January to June 2017 and in January 2019, softwood chip export data prices were officially unavailable

Of course, further analysis is desirable, and the Wood Market Edge online platform provides a growing array of data and resources to assist subscribers to analyze a wide range of forestry and wood products markets. The IndustryEdge team is available to assist the supply chain to understand markets in great depth and global breadth.

Softwood Lumber Prices Tumble 40%; Is Another Rally on the Horizon?