On September 14, the European Parliament voted to recognize primary woody biomass as a renewable energy source, which is consistent with its prior classification under both the first Renewable Energy Directive (RED) and RED II.

The decision will allow primary woody biomass to continue counting towards already-established renewable energy targets. However, the decision also adopted amendments calling for phasing down the share of primary wood biomass counted as renewable energy. As Erin Voegele at Biomass Magazine noted in her coverage of the decision, “Under the proposal, the energy share from solid biomass fuels derived from primary woody biomass cannot exceed the share of the overall energy consumption of the average of such fuel in 2017-2022, based on the latest available data.”

The proposals define primary wood biomass to include all roundwood felled or otherwise harvested or removed. This includes all wood obtained from removals, such as the quantities removed from forests, including wood recovered due to natural mortality and from felling and logging. It also includes all wood removed with or without bark, including wood removed in its round form, or spit, roughly squared or in other forms, such as branches roots and stumps, along with wood that is roughly shaped or pointed. The definition of primary wood biomass does not include woody biomass obtained from sustainable wildfire prevention measures in high-risk fire prone areas, wood biomass obtained from road safety measures, and woody biomass extracted from forests affected by natural disasters, active pests or diseases to prevent their spread, while minimizing wood extraction and protecting biodiversity.

Markus Pieper, Member of Parliament (MEP) leading on RED III, added: “One thing is clear: wood-based biomass is a building block of the energy transition and, despite the vote of left-green Members of the European Parliament, can still be counted as renewable energy. The new directive will set the necessary framework to achieve the greatest possible CO2 reduction effect and not to ensure that our forests are burned in the future. I am counting on the member states to follow our proposals as the procedure progresses."

As Bioenergy Insight noted, industry reaction to the decision has been mixed:

A ‘Win’ for Common Sense

Europe’s largest single source of renewable energy is sustainable biomass, which is a cornerstone of the EU’s low-carbon energy transition. Seeking to accelerate this transition, the European Commission has proposed a series of ambitious new goals to achieve by the end of the decade, including:

For the last decade, forest resources in the US South have helped to meet these goals—as they will in the future. This heavily forested region exported over 7 million metric tons of sustainable wood pellets in 2021­ – primarily to the EU and UK - and is on pace to exceed that number in 2022 due to the ongoing war in Ukraine, which has pinched trade flows of industrial wood pellets from Russia, Belarus and Ukraine. 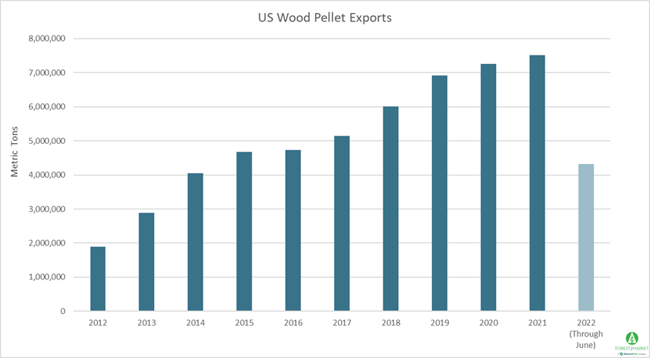 There are five important principles to help understand what constitutes sustainable biomass, how it supports forest growth in the US South, and how it can contribute to achieving the European Parliament’s climate goals.

Renewable forest resources should be a natural option for parts of the EU as a sustainable and cost-stable feedstock, which would largely act as a “bridge” fuel until more efficient and less expensive forms of renewable energy avail themselves. And contrary to some of the prevailing—and wildly misleading—narratives regarding the nature of biomass feedstocks, utilizing low-value forest resources for the production of wood pellets is actually beneficial for long-term forest sustainability.

Chemical recycling: Towards a circular economy

Bioeconomy: Poised at a historic crossroads