Batteries Made with Renewable Wood Could Help Alleviate Energy Pressures

When we think of innovative battery technologies and some of the scalable, successful products that have been developed over the last decade, one product typically comes to mind: Lithium. This soft alkali metal is the building block for the popular Lithium ion (Li-ion) batteries that now power everything from mobile devices and electronics to Tesla automobiles.

These batteries have traditionally stood apart from other technologies due to their high charge density and high cost per unit, though the latter attribute has changed dramatically over the last decade. The volume-weighted average price of a typical Li-ion battery has plunged from nearly $2,000 in 2010 to just $140 in 2020—a decrease of 93%.

Lower raw material costs generally benefit the consumer, but accessible lithium deposits and mining capabilities are now limited to a few regions around the globe, making transportation in a stressed global supply chain a real challenge. There are also cascading environmental impacts surrounding any type of non-renewable resource extraction from deep within the earth; one ton of extracted lithium, for instance, requires approximately 500,000 gallons of water.

Wood to the Rescue

While the idea of a wood-powered iPhone seems ridiculous at first pass, a Swedish battery producer founded by two former Tesla execs believes there is a new place for wood in our never-ending quest for energy, and the science behind the idea makes more sense than you might have imagined.

As Electrek recently wrote, “The initial goal of Northvolt was to recreate the ‘gigafactory’ concept in Scandinavia, producing batteries at a ‘gigawatt-hour’ level to support their growing demand for EV modules. The startup quickly secured funding to begin factory projects with several automakers, including Volkswagen, BMW, and Volvo, which included plans for a battery facility in Sweden to support the latter’s electrification goals.

“In late 2021, Northvolt began cell production at its first gigafactory, followed by news of a second factory coming to Sweden by 2025. By March 2022, a third gigafactory had been announced, this time for Germany.”

Lignin from wood – organic polymers that form key structural materials that support tree tissues – is a key component of Northvolt’s battery tech. Trees are composed of 20–30% lignin, which makes it one of the largest renewable sources of carbon on earth. Per the business arrangement, Stora Enso will provide a sustainably sourced lignin-based anode material called Lignode, and Northvolt will use its gigafactory infrastructure to drive design improvements, develop production processes, and scale the technology for broader market adoption.

How Does it Work?

Per Stora-Enso, a lithium-ion battery consists of a positive electrode, a cathode, and a negative electrode called an anode. When a battery is charged, lithium ions in the cathode move into the anode, where they connect with carbon particles and are stored until the battery is discharged, which occurs when you use an electronic device, for example.

Today, the material used in the anode is often graphitic carbon – which is a strictly layered material that can have slow charging times. Stora Enso’s new technology replaces fossil-based graphite with a so-called “hard carbon” derived from lignin. The disordered and open structure of hard carbons enables the anode to be charged and discharged more quickly compared to traditional graphite. It also allows for better performance at lower temperatures and is therefore less prone to safety risks in temperatures below freezing. Lignode also ensures that maximum value is extracted from harvested trees and their myriad fiber-based materials while producing higher-performing batteries. 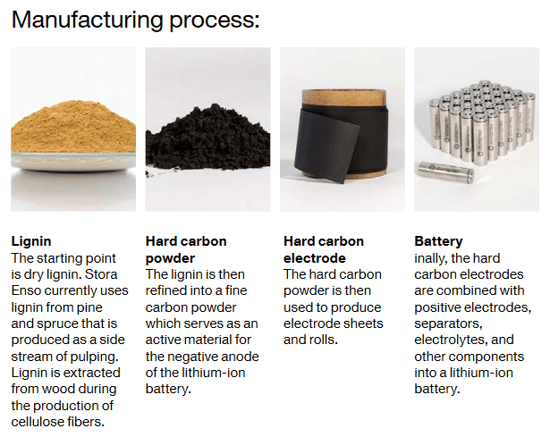 Stora Enso has been operating industrialized production of lignen at its production site in Finland since 2015, which has current production capacity of 50,000 tons annually.

As electronics and auto manufacturers continue to seek innovative battery technologies that outperform the current generation, companies who can develop cells from widely-available and renewable natural resources could change the landscape. Anything that can potentially alleviate pressure on battery suppliers will help support broader EV adoption, and wood-based batteries might play an important role in the global transition towards cleaner energy production.

CELLULOSIC FIBERS - A WORLD OF OPPORTUNITY

The P&P Industry Kicks Off October With Impressive Sustainability Developments