The chemical industry endured many problems in 2020 and 2021 but perhaps the most disruptive – which overhangs the industry still – is its logistics. Companies had become adept at sourcing molecules from where they were most economically manufactured and shipping them to where they would be converted most advantageously.

Supply chains started unravelling two years ago as problems from Covid-19 began to mount. In part this was due to shortage of trucks (with drivers getting ill) and disruption to rail traffic. Inland shipping issues took their toll – even water levels on the Rhine being too low, or too high. But the major problem was delays in ocean shipping.

The prime contribution to delays came from disruption at ports due to port workers off sick or in quarantine. Ships not being loaded or onloaded meant that queues of vessels waiting their turn at berths stretched out to sea. The knock-on effect was problems with containers, some stacked waiting to be unloaded, others empty but not where needed. 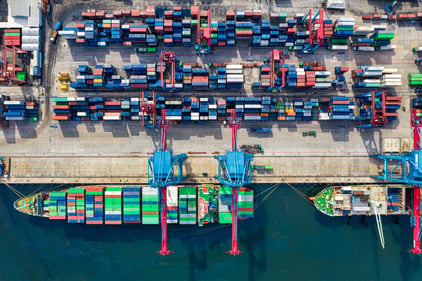 Container shipping rates reached $12,000 or more for 24 tons of cargo from East Asia to the US, for example. Chinese ports in particular encountered a shortage of trucks to distribute goods due to many drivers being in quarantine. It remained a problem at Ningbo in mid-January, with re-routing of ships to Shanghai causing congestion there too. Sometimes, ships are having to skip planned stopovers at Chinese ports entirely.

But US West coast ports have also seen queues of 60 or more ships at sea waiting to dock. To compound problems, some chemicals need refrigerated containers or temperature-controlled tanks. These delays can cause havoc. Take the MSC Flaminia’s catastrophic fire in 2012 as a harrowing reminder of the dangers of port delays. Three containers of divinyl benzene aboard the German-flagged container ship polymerised violently when the efficacy of an inhibitor expired mid-Atlantic.

After two years of supply chain disruption, the chemical industry is considering what should be done for the future. One trend will be to work with higher inventory levels. Companies were desperate to keep plants running through 2020 and 2021. They repeatedly ramped up their price bids as stocks dwindled to secure raw materials. Never again, they say.

Undoubtedly, reliance on just-in-time (JiT) supply saves money when everything works smoothly but is a trap when it doesn’t. There will be less reliance on JiT in future. Another approach is to encourage establishment of supplies locally and reduce reliance on suppliers half way around the world. If this reverses a trend of the last decade or two, it amounts to reshoring an activity that had become cheaper overseas. But it’s a scenario in which both the importing and exporting countries lose out. And the world will see increased duplication of chemical plants.

Raising inventories and ditching JiT will require additional working capital, while reshoring will require investment capital. Perhaps not a huge burden with current low interest rates, but they look likely to rise as inflation surges.

The chemical industry will be actively employed in helping the transport industry meet goals of zero net carbon emissions by 2050. Much capital investment will be needed, though this will be shared with the transport and fuel industries.

On this journey to a carbon neutral transport system, interest rates will be carefully followed...