A renewable technology hailed as revolutionary in the 2010s may emerge as a choice route to deliver key intermediate chemicals in the future.

When feedstocks derived from biobased raw materials started gaining attention early in the millennium, they were dubbed next generation chemicals. A 2004 US Department of Energy report identified succinic acid as one of the top 12 building-block chemicals that could be produced from renewable feedstocks.

The technology to deliver it – which, unusual for chemicals industry innovation, was available to the science community open source – combined industrial biotechnology with an innovative purification process and chemical catalysis.

Moving beyond the use of petrochemical-based starting materials, it presented an alternative way to convert renewable feedstocks into chemicals for use in a wide variety of everyday products.

Established in 2008, BioAmber was the first to commercialise biosuccinic acid after perfecting its technology at a small plant in France. By 2015, BioAmber and Mitsui collaboratively brought a 30 ktpa plant onstream in Sarnia, Canada and reported a revenue of $2.5 million for one quarter soon after. The plant’s pioneering succinic acid was produced with glucose from agricultural sugars derived from southern Ontario’s agricultural community.

Before the end of 2013, then 97%-owned PTT Global Chemical (PTTGC) subsidiary Myriant opened a 14 ktpa succinic acid plant in Louisiana, US. Reverdia – a DSM/Roquette joint venture – entered the market with a 10 ktpa plant in Italy. With the founding of a 10 ktpa plant in Spain by BASF/Corbian Purac collaboration Succinity the following year, biosuccinic acid’s future was looking very bright indeed.

But in 2018, collapsing crude oil prices rendered the cost of petrochemical-based feedstocks significantly lower than the renewable sources for biobased products. With dwindling sales and customers returning to their petrochemical-based supply chains, BioAmber soon went bankrupt.

However, Myriant never reached full capacity at the site and was only able to produce in batch quantities. The plant was idled in 2016 and sold to Stepan in 2021. The new owner is currently converting the site to produce biosurfactants. 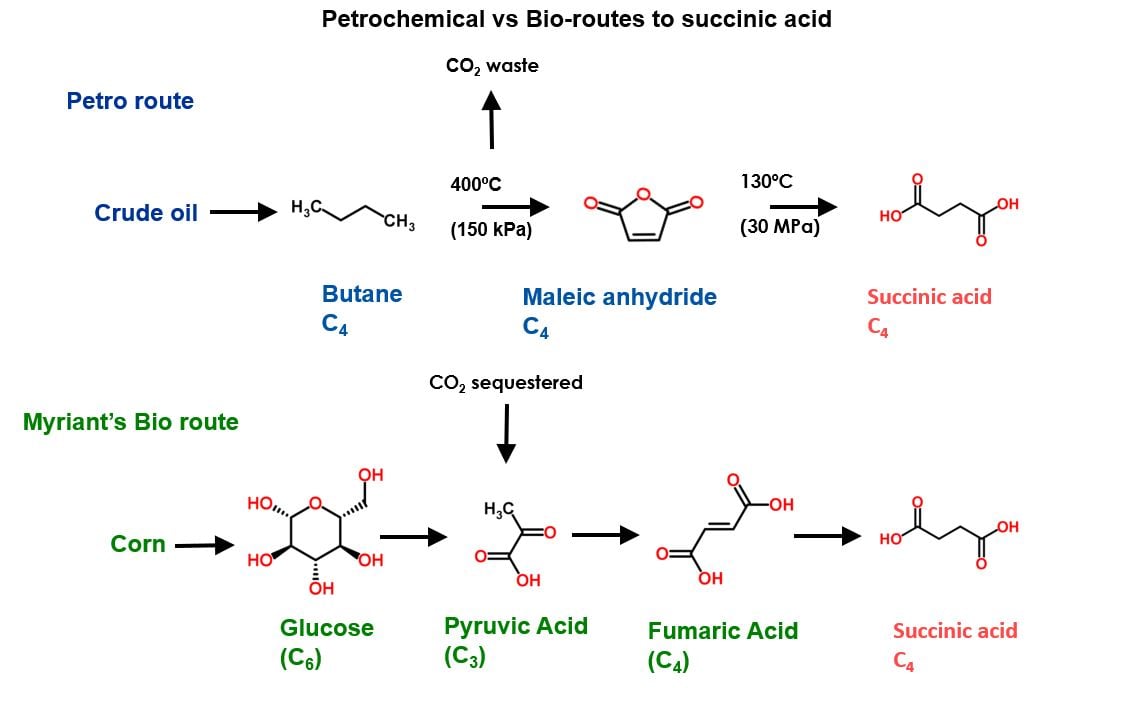 Reverdia continued as a DSM/Roquette joint venture until 2019 when it was announced that the company had been dissolved, and that DSM would become the exclusive licensor to strategic customers. The technology had 'matured to a point where the roll-out potential is significant enough to warrant a focused effort on licensing', said the Roquette press release.

The trailblazing Sarnia plant of BioAmber was acquired by Taiwan-headquartered LCY and, by 2021, it had reportedly reached an 18 ktpa capacity. LCY’s goal is to hit 30 ktpa by 2023.

Recalling the near demise of biobased succinic acid, Myriant’s former chief executive Cenan Ozmeral told C&EN in 2019 that while the technology is sound ‘succinic acid plants were conceived when oil cost more than $100 per barrel and chemical executives were concerned about the future of their industry’. When global recession plus the emergence of cheap shale oil and gas brought down the price of petrochemicals, it could no longer compete.

Which really does beg the question, could the recent rise in price to $100-plus per barrel for crude oil create the right conditions for a biosuccinic acid revival?

Biobased building block for the 2020s and beyond

Or, to put another key spin on the biobased feedstock question, is consumer appetite for non-fossil-based goods yet strong enough to accept a higher price tag?

Tecnon OrbiChem founder Charles Fryer thinks it could be. ‘If we think about how to make a plastic product more sustainable because it is a plant-based material, almost certainly that will increase the cost. How do we persuade the public to accept that?’

'Companies now know their obligation is not just to shareholders but to the public and the planet. Reducing energy use and reducing the carbon footprint and to have sustainability always at the forefront of planning has become required thinking for industry, to head off a possible backlash from the public that otherwise might come. We must all work – for the sake of our children and grandchildren – to leave the world’s resources as good as we found them – or better than we found them.

'We have got to get to this way of thinking and we have an obligation to drive sustainability forward,’ Fryer adds.

'Margins are so good, even the maleic anhydride that BDO and PBS markets do not consume

will give producers good profits in other outlets'

'The problem is especially prevalent in downstream resins applications such as PBS,’ she added. ‘This is what we are seeing with regard to petrochemical-based succinic acid producers in China.’

On a separate note, the PBS market has been somewhat held back by high prices of 1,4-butanediol (BDO), which is another key raw material in the production of PBS. BDO prices in China skyrocketed in 2021 and have so far remained at a high level.

One visible PBS producer in the Chinese market Xinjiang Blue Ridge is understood to have scaled down operations during 2021 because of the high price of BDO. Chinese BDO-production is mainly based on the Reppe process, which uses acetylene as its starting feedstock. There is currently no maleic-based BDO production in China.  However, there have been some announcements of MA projects associated with downstream BDO in China, which could lead to lower-priced BDO in future.

Based on announcements, several maleic anhydride projects are expected onstream in China between now and the end of 2024. The additional capacity will total 1370 ktpa. Hu said it is likely many will be associated with downstream BDO production.

That is the understanding, Hu said ‘as a number of PBS and polybutylene adipate terephthalate – or PBAT projects have been announced for the next couple of years too’, which will require new supplies of BDO. PBAT is made from BDO and a combination of adipic and terephthalic acids.

Expanded availability of BDO will permit an expansion of PBS production, which will require additional availability of succinic acid. The attraction of PBS is that it is easily biodegradable, so is in demand for applications such as packaging, disposable cutlery and agricultural mulch film, which authorities in China are insisting are made of biodegradable materials.

In terms of the maleic anhydride output, Hu said ‘My understanding is that because maleic anhydride margins are so good now, even if this MA does not end up being consumed by BDO and PBS markets, the producers will still get good profits from selling the MA in other outlets.’ 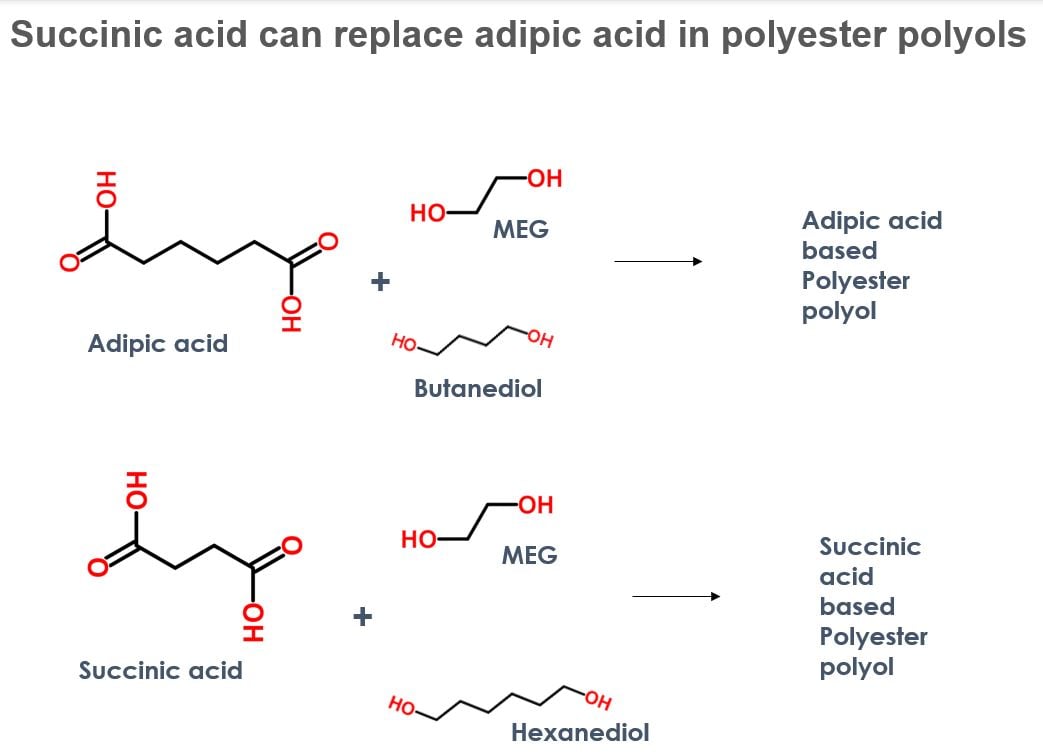 It can replace adipic acid in the polyester polyols of polyurethanes, with some reformulation; phthalic anhydride in plasticisers and the long chain esters’ adipic acid in lubricants, it’s a very versatile feedstock.

Towards a net zero economy

Biosuccinic acid may not yet be mature or available enough to significantly threaten a fossil-based economy but there’s a chance it will emerge as brands and product makers shift to renewables. As Myriant's former chief executive Ozmeral said, the technology is sound. Perhaps rising oil prices will bring on biosuccinic acid's 21st century phoenix moment.

Tecnon OrbiChem's insight into the commercialisation and development of biobased chemical feedstocks is available to subscribers of the chemical data intelligence platform OrbiChem360.

Watch this one-minute video to find out more about the platform and what it offers.