“Making More Lumber” Is Not So Simple

In 2Q2020, a tremendous supply/demand imbalance emerged in the North American softwood lumber market as a reaction to the uncertainty associated with COVID-19. However, this imbalance was not unique to the lumber market.

In fact, we are now a year removed from the initial wave of lockdowns and nearly every US manufacturing-based supply chain remains under various degrees of stress, which is reflected in current prices. The Bloomberg Commodity Index (BCOM) is up 21% since March 2020, and individual selected commodity price increases over the same time period include:

Throughout the pandemic, Forest2Market has provided regular updates and analysis of lumber market developments as they have happened, noting that prices first soared in June 2020 based on three primary factors:

Though demand driven, this combination of events resulted in a large supply gap in the US market. As production capacity fluctuated amid ambiguous guidance and COVID-induced restrictions at the state level, demand patterns changed and the lumber manufacturing sector was forced to chase a moving target.

Recent history provides further context as well as insights into the current structure of the southern lumber industry, which helps shed light on its reaction to the market over the last 12 months.

Industry Impacts from the Great Recession

For those unfamiliar with the forest products industry as a whole—and lumber manufacturing specifically—it’s important to understand the delicate relationship that exists between demand for forest products and the capacity to manufacture them. Raw material costs (timber) can comprise upwards of 75% of total operating costs for forest products manufacturers, so meticulous procurement strategies and management of those resources ultimately defines success.

Finding the right balance between the flow of wood into a sawmill vs. lumber output is driven by demand for finished lumber via the homebuilding and remodel sectors, which are subject to unpredictable and oftentimes significant fluctuations. US housing starts data over the last two years illustrates the volatile month-over-month (MoM) demand from builders. Most recently, February 2021 housing starts were down -10.3% MoM before jumping nearly +20% to a 15-year high in March. Not only is the amount of lumber needed to close this one-month gap considerable, but who could possibly build a reliable production forecast based on the two-year data below? 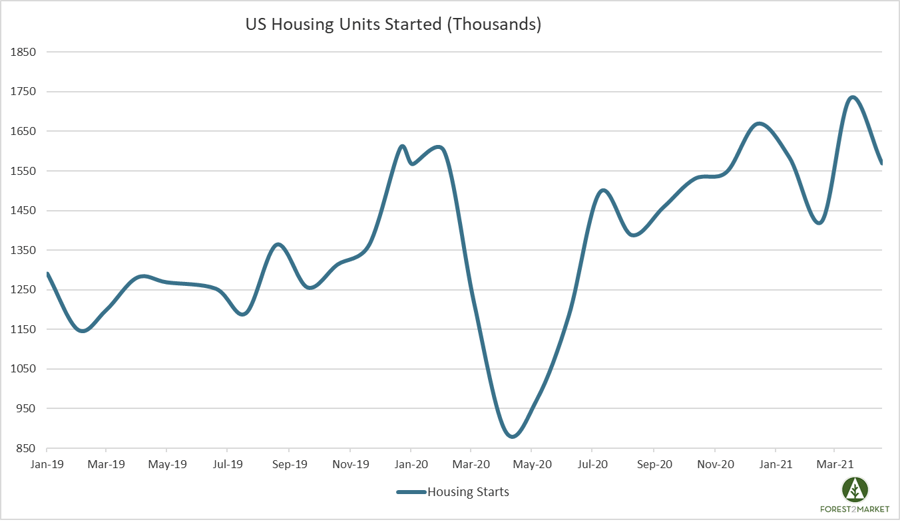 Tremendous operating costs in combination with inconsistent demand from homebuilders has forced the lumber industry to follow a “build-to-suit” business model. Manufacturers simply cannot afford “slack” in the system so they must match production to demand as closely as possible to manage risk and remain profitable. There is little surge capacity in the value chain, and for good reason: Historically, the market does not allow it.

In the wake of the Great Recession and ensuing housing market crash, the southern forest industry was hit hard, and its mill portfolio was dynamic as a result. From 2007-2017, the region saw the permanent closure of three pulp and paper mills, three particleboard plants, 36 pine sawmills and 66 hardwood sawmills. While many of these shuttered pine sawmills were smaller in scale than some of the more modern facilities, the closures represented a loss of roughly 1.7 – 2.0 billion board feet (BBF) of annual lumber capacity. 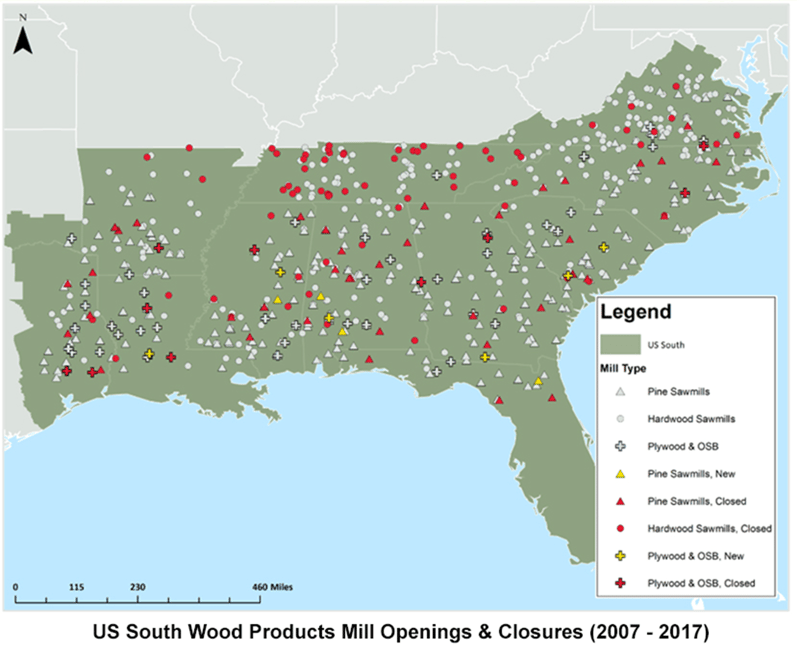 Those mills that were able to survive did so in very lean conditions during the intervening years as the housing market regained its footing. Innovative mills also invested in new technology that would help them improve efficiencies and better match production to demand trends going forward.

As US homebuilding slowly picked up momentum, the southern sawmilling industry reacted accordingly. In 2017, southern yellow pine (SYP) lumber production totaled 18 billion board feet (BBF), or roughly one-third of total North American production. An additional 3 BBF of new SYP lumber capacity was installed by the end of 2020 via several new mill facilities—both greenfield operations and older mills that were significantly overhauled. By the end of 2022, there are plans to add more than 2.1 BBF of additional capacity throughout the region to help meet demand.

However, increasing lumber production when monthly demand soars is not a quick or simple process. Adding extra capacity through the expansion of standing mills (or constructing new mills) takes several years to complete. For example, the Rex Lumber mill in Troy, AL broke ground in 2018, began manufacturing operations in 2019, produced over 100 MMBF feet in 2020, and is now on target to produce 175 MMBF in 2021.

While the current situation is equally frustrating for both homebuilders and buyers alike, no one could have foreseen the compounding effects from the pandemic that began a year ago. However, the data demonstrates that it was insatiable demand that outstripped supply and drove prices to new highs, not insufficient domestic production.

Despite minimal surge capacity and devastating wildfires in the Pacific Northwest (which limited access to timber), US producers actually increased overall production in 2020 in the face of a number of unforeseen challenges. Southern manufacturers increased production by more than 7% year-over-year (YoY).

If lumber production was up in 2020, why are prices still so high?

In the graph below, notice the steadily increasing trend in quarterly housing starts compared to the weighted average price of SYP finished lumber over the last 10 years. Total housing starts skyrocketed 196% from the bottom in 4Q2010 to a new peak in 1Q2021. While lumber price demonstrated some volatility—swings typically within a range of +/-$100—the trend largely follows the average rate of inflation until the onset of COVID-19 in 2Q2020. At this point, a major disruption occurred as April housing starts plummeted 27% and the price of lumber began to deviate from the historic average. 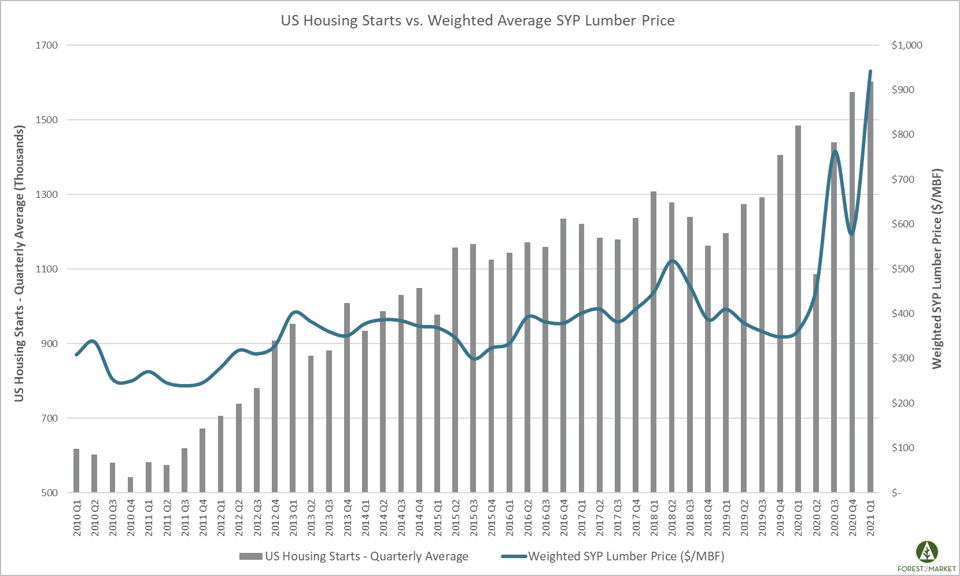 Interestingly, the market attempted to find equilibrium in 3Q as lumber prices plunged back towards the historic average. But additional demand from homebuilders in 4Q and 1Q2021 kept the pressure on and prices quickly reversed course before hitting new highs. The disruption brought about by the pandemic created an enormous imbalance that the market has simply not yet worked out.

The situation remains unchanged in 2021: North American softwood lumber producers continue to match production levels to demand patterns as efficiently as possible. While the industry has been chasing a wildly volatile target for the last 12 months, its reaction to the market is reflective of historical supply/demand patterns.

These production trends matched demand trends correlated to housing starts during the period, which were down -6.0% and -10.3, respectively.

Again, lumber producers must carefully keep production volumes in line with order volume to manage risk and safeguard their individual businesses, employees and the rural communities they serve. Additional capacity will help establish more surge flexibility in the future, but it’s important to remember that new sawmills are capital intensive and take years to move from the planning phase to being fully operational.

Though we are now a few years removed from the worst of the Great Recession, the memory still lingers for many American manufacturers who were fortunate enough to survive. The experience was especially poignant for US lumber producers, who were dependent on a housing market that was at the center of the collapse. The innovative sawmills that evolved through the crisis, met homebuilder needs and invested in talent, technology and capacity expansions have done so based on long-term confidence in the housing sector. It is this commitment that will benefit America’s homebuilders—regardless of market performance—moving forward.

What’s Driving the Disparity Between Log and Lumber Prices?