After a disappointing May (-14%), US home building continued to inch down in June as the housing market cools amid surging mortgage rates and crippling inflation. Forbes noted: “… LPL Financial chief economist Jeffrey Roach said housing starts declined because demand is ‘quickly drying up’ from higher borrowing costs as the Federal Reserve raises interest rates, though he expects home building activity should hold up despite the grim outlook.” 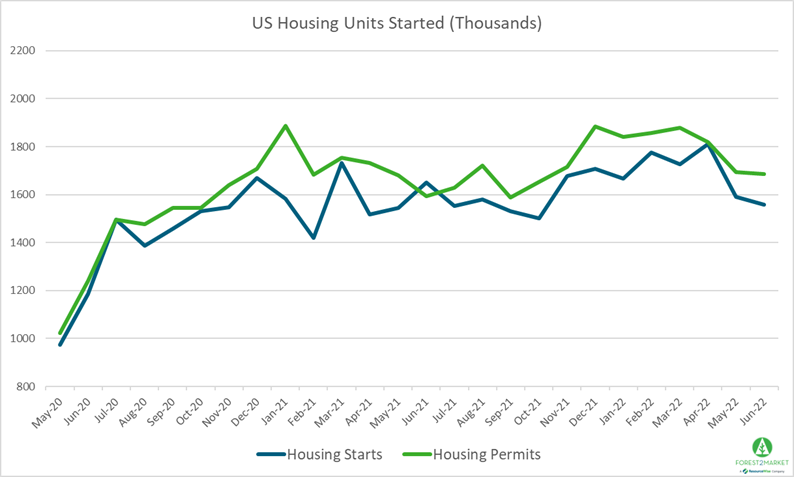 In mid-July, the 30-year fixed mortgage rate was at 5.5% – the highest level since 2008, and the NAHB/Wells Fargo Housing Market Index (HMI) has now dropped seven months in a row. The metric hit 55 in mid-July, which represents the lowest level since May 2020 and the second largest one-month drop in the survey's 37-year history.

“Six consecutive monthly declines for the HMI is a clear sign of a slowing housing market in a high inflation, slow growth economic environment,” noted NAHB Chairman Jerry Konter. “The entry-level market has been particularly affected by declines for housing affordability and builders are adopting a more cautious stance as demand softens with higher mortgage rates.”

On a somewhat brighter note, although resales declined, sales of new single-family homes in May (the most recent data available from the U.S. Census Bureau and the U.S. Department of Housing and Urban Development) reversed much of April’s 12% slump. Analysts speculated the pickup in new-home sales may reflect some buyers locking in mortgage rates in anticipation of even higher borrowing costs in the not-too-distant future.

Current home prices may be reflecting some softness in the market, though it is admittedly difficult to reconcile that intuition based upon the median price of existing-home sales, which hit a new record in May. However, May new-home prices retreated—especially the average price (-10% MoM), which is confirmed by observation that the number of new homes sold in the $500,000-750,000 range has fallen by over 26% since January.

One noteworthy and related challenge in the current inflationary environment is the rapidly diverging relationship between the median new home sales price and the shelter component of the Consumer Price Index (CPI). The shelter component represents rent and owner's equivalent rent, which together comprise roughly 1/3 of the index by weight. Consider that new home prices are up roughly 40% cumulatively since January 2020, and rents on apartment leases also continue to skyrocket. Meanwhile, the shelter component of the CPI is up only 9% cumulatively since January 2020. 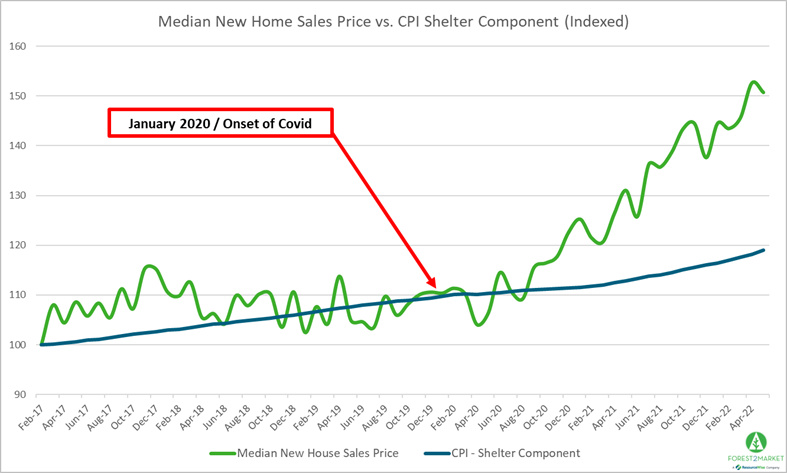 In other words, 1/3 of the total CPI has a LOT of catching up to do with the real estate market. As a result, rising home prices will continue filtering into CPI for quite some time - applying upward pressure on the overall index as it chases the actual market – which means this bout of inflation is likely far from “transitory.”

As the Brooking Institution observed, “Given recent trends in rents and house prices, however, analysts anticipate the shelter component will boost the CPI inflation measure in coming months. If the historical relationship between housing prices and rent inflation hold true… that rent inflation will increase by about 7% in 2022 and 2023, almost twice the pre-pandemic five-year average. With shelter making up about a third of the CPI, these findings imply that housing will boost headline CPI inflation about 1.1 percentage points above its historical average by the end of 2022.”

It is worth noting that the Brookings forecast dates to mid-May (before issuance of June data) and is likely on the low side of conservative. As the FED takes more aggressive steps to tamp demand, we expect the downward trend in single-family starts to persist through the remainder of the year as inflationary pressure and surging mortgage rates sideline a segment of homebuyers, and builders become more cautious.

Wood Pulp is a Sustainable Cotton Replacement, but Is It Profitable?

Steady Pace in Forest Industry Manufacturing with Only Slight Decline