Anti-Forestry Insanity: The Opinion Piece That Keeps on Giving

There’s an old adage about the paralyzing effects of cognitive dissonance: The definition of insanity is doing the same thing over and over and expecting a different result.

As anti-forestry extremists double down on their rejection of reason while embracing what can best be described as a form of anti-scientific “insanity,” they continue to put America’s forests, wildlife, rural communities and natural resources at risk.

60s icon and singer/songwriter Carole King recently leveraged her celebrity status to publish an opinion piece in the New York Times titled “It Costs Nothing to Leave Our Trees as They Are,” which called for an end to commercial timber harvesting on federal lands. “President Biden should issue an executive order immediately directing his secretaries of the interior and agriculture to take all steps available to them to stop commercial logging on public land,” King wrote. She goes on to promote many of the stale, dated arguments that were believed to be relevant decades ago.

5G news flash: Scientific thinking on the subject of forest health and management has evolved dramatically since the days of broadcasting hit singles across FM airwaves.

As Nick Smith, Executive Director at Healthy Forests, Healthy Communities observed, “It’s unclear what makes her an expert on forestry, other than the fact she lives luxuriously in Idaho, in a house made of wood, with a national forest as her ‘nearest neighbor.’”

Even cursory research around her primary point of contention illustrates that most federal forestland is already off-limits to commercial timber harvesting. At one time, nearly ¼ of all new US homes were built with lumber harvested from National Forest trees. Now, it’s close to zero—where it has been for the last 20+ years.

King then recites a few reactionary and simplistic anti-forestry talking points: “Trees absorb carbon dioxide and water from the air and ground and through the process of photosynthesis release oxygen into the air. It costs nothing to leave them as they are. Allowing commercial logging to continue in our national forests would also be a catastrophe for the biodiversity they contain.

“The order I propose would bring about a significant reduction in atmospheric carbon dioxide. And it will help the United States meet the requirements of the Paris agreement, which Mr. Biden rejoined on the first day of his presidency.”

King’s flawed logic, unfamiliarity with the simple lifecycle science of how trees grow and die, and unwillingness to entertain reason may be the norm for many celebrities, but environmental scientists and those dedicated to improving forest health know the opposite is true: There is a tremendous cost to leaving our trees alone.

Without proper management that includes thinning and harvesting, forests become overstocked and subject to pest and disease invasions that can quickly convert once-healthy timber stands into millions of acres of dead and decaying trees. This buildup of dead trees then becomes dangerous fuel for megafires, which release carbon emissions that affect everything from regional forests to the global climate, and drive climate change-related events that then contribute to even more wildfires.

Smith continued, “She likely isn’t counting the billions of dollars our country has spent fighting fires on tinderbox forests, nor the loss of lives, homes and communities, wildlife and habitat, air and water resources and other values we’ve lost due to passive forest management over the decades that logging has been largely non-existent on federal lands. We have already lost a lot, and we stand to lose a lot more if the singer is successful.”

Since the adoption of the Clinton-era Roadless Rule, 37 million acres of national forests have burned, destroying families, forests and communities while emitting billions of tons of carbon dioxide and other harmful pollutants into the atmosphere.

Beyond the destruction of lives, communities and natural resources, is King honestly unaware of the monetary costs the federal government expends annually solely on fire suppression? The patterns in the chart below clearly illustrate that the disastrous anti-forestry policies instituted in the mid-1980s have resulted in more acres affected by wildfire at ever-expanding costs to taxpayers. 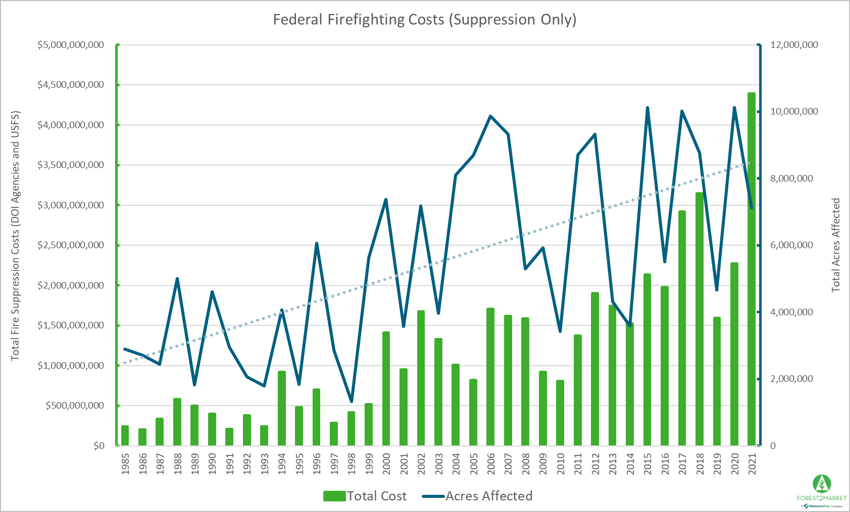 And does King have any idea what kind of environmental costs these fires exact?

In 2020, nearly 11 million acres of forests burned in the West at tremendous social and financial costs. To put the carbon emissions from these events into perspective, the 2020 wildfires in California alone generated nearly 100 million metric tons of carbon dioxide emissions, which is roughly 30 million tons more CO2 than the state emits annually from power production. That number is also equal to half of the total carbon stored in Humboldt County, CA forests, which are densely populated with gigantic Sequoias.

The bottom line is this: America’s federal forests are choked with an overgrowth of dead and dying trees, which act as dangerous wildfire fuel while reducing their ability to sequester carbon. We have been following the same faulty protocols for decades while expecting a different result. And yet, the data are incontrovertible. Trees are dying in our National Forests at ever-increasing rates, tree growth is down over 50% and harvests are down 80%. Does anyone honestly believe this is a practical, sustainable solution for managing our forest resources? 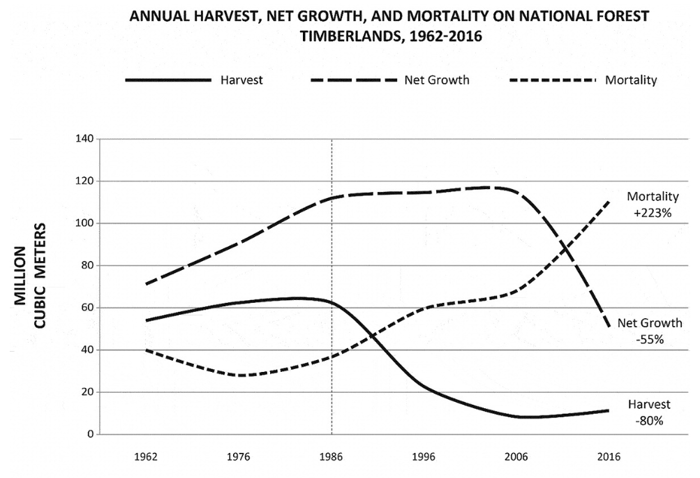 Obviously, no one is “winning” in this situation—not the rural communities and wildlife habitats in the West, not the millions of outdoor recreationists, not the forest products industry and logging sectors, and especially not the regional forests and surrounding environment.

We must change course. Throughout the West, scientists are warning that we must cut tree densities to sustainable levels to allow forests to become more fire-resilient. Commercial thinning and logging are tools that help sustainably accomplish this work while improving forest health and providing wood products that store carbon and require less fossil energy to produce—clearly a “win-win” for America’s rural communities and the environment.

In the end, King seems unaware of the forest dynamics occurring in her own backyard and offers no meaningful solutions to the problems she has constructed with faulty logic. If she truly wants to advance the cause of forest health, sustainability, and the safeguarding of our natural resources, a frank conversation around her misguided recommendations would be a good place to start:

Solving the challenges posed by climate change and a rapidly evolving global economy in the 21st century will require dispassionate, science- and reason-based strategies from multiple stakeholders. It is time to move beyond the feel-good song lyrics and ideological talking points of a bygone era, which have failed America's forests, natural resources, and rural communities for decades.

Enough with the anti-forestry insanity.

Sowing What You Reap: Replanting After a Timber Harvest