How Will the Increase in Carbon Markets Affect the P&P Industry?

For several years, Fisher has paid close attention to developing global carbon markets in order to get a better understanding of the various ways they might affect the global Pulp and Paper industry. As we’ve consistently stated, it’s not a matter of if carbon costs are coming, but when they are coming – and with the P&P industry making up one of the top five industrial categories that contribute to the most greenhouse gases emitted, these carbon costs could have a significant impact industry-wide.

As more governments adopt net zero targets, we are beginning to see more announcements and implementations of more carbon pricing schemes as illustrated in the image below. The most common forms of carbon pricing are either carbon taxes or an Emission Trading System (ETS) – the two main forms being either a cap-and-trade system or a baseline-and-credit system. 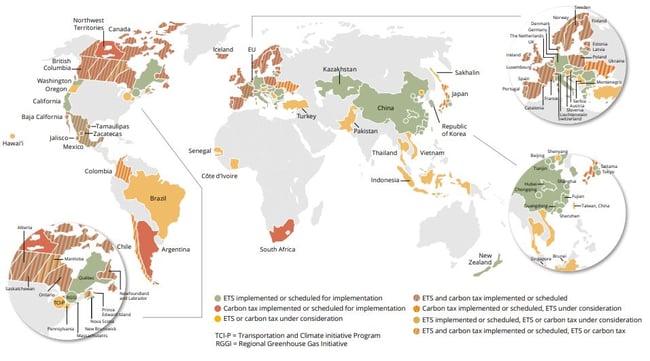 Recently, analysts at Refinitiv, an American-British global provider of financial market data, stated that the value of traded global markets for CO2 permits last year increased by 164% to a record €760 billion. While the global spike in natural gas prices that developed in 4Q2021 and consequently led to more coal power generation and an increased demand for permits was a main cause, there was an even larger factor at play that contributed to this increase in value – the EU’s ETS.

The EU’s Emissions Trading System took effect in 2005 and is the world’s most established carbon market – accounting for €683 billion of the total value. By the end of 2021, prices in the EU’s ETS had more than doubled compared to 2020 prices to over €80/tonne due to expectations that the EU’s Fit for 55 package (a newly developed climate target to reduce greenhouse gas emissions by 55% by 2030) would create a tighter market.

There is also a secondary scheme that is in development across multiple markets via carbon offsets. Carbon offsets are intended to compensate for the emission of carbon into the atmosphere as a result of industrial or other human activity, such as when it is quantified and traded as part of a commercial program. For example, if a manufacturer involved in a cap-and-trade system exceeds their allotted permits for CO2 emissions, this could be offset with an equal amount of CO2 reductions somewhere else.

BloombergNEF has come out stating that prices for carbon offsets (verified emissions reductions equivalent to one ton of carbon each) could increase fifty-fold to as high as $120/ton or as low as $47/ton in 2050 – depending on the scenario, as seen in the image below. If these offsets continue to be permitted to hit net-zero goals, the market could end up oversupplied with largely worthless credits – driving the prices down and creating criticism around quality.

However, if the market is restricted to just offsets that either remove, store or sequester carbon in order to achieve net-zero targets, then there will be an insufficient supply to keep up with demand – creating spikes in prices and damaging liquidity. Head of Sustainability Research at BloombergNEF Kyle Harrison stated, “There will be growing pains in the coming years as stakeholders try to understand how to sustainably grow the carbon offset market and determine who it will serve.”

All-in-all, buying carbon offsets shouldn’t be looked at as a “get-out-of-jail-free card,” as Harrison puts it, because as the market matures, prices will inevitably rise and companies will be forced to react accordingly.

How This Impacts the P&P Industry 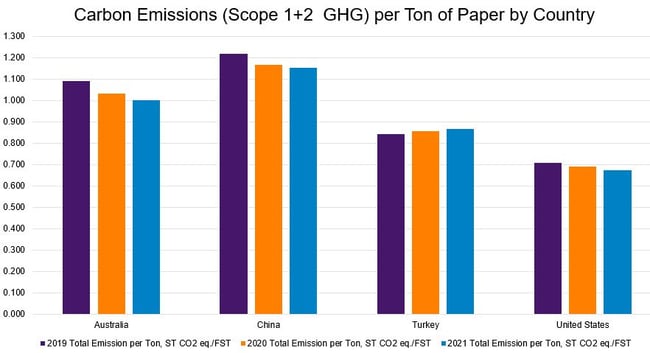 With the rise of carbon pricing mechanisms, the cost of doing business will ultimately increase for manufacturers located within these high emitting regions – and carbon is already impacting the bottom line of global manufacturers. In addition to higher prices, these manufacturers could also potentially lose the business of retailers and companies who are focusing on their own individual carbon footprints, which encompasses everything from who they select as their supplier to transportation and packaging, in order to achieve sustainability goals.

Moving forward into a new century increasingly driven by ESG metrics, pulp and paper producers need to have a reliable way to measure the amount of carbon they are producing. FisherSolve’s Carbon Module shows the carbon output of every pulp line and paper machine for each of the products they produce - all the way from cradle to destination. As more governments continue to implement carbon pricing mechanisms and as we witness the value of traded global markets for CO2 permits increase, building actionable carbon/emissions business plans based on this knowledge will be crucial.

Amongst a Shortage of Reliable Carbon Benchmarking, Fisher Has the Solution