Ethylene (C2H4) is a key chemical for producing a huge range of chemicals, polymers and plastics. Much of the world’s C2H4 demand is met via the Naphtha cracking of crude oil process.

According to the Gulf Petrochemicals Association, around, 183 million tons of ethylene was produced worldwide in 2019. The CO2 emission cost of the process has been estimated at up to 2kg per kilogram of ethylene produced.1

Naphtha cracking produces a wide range of co-products in addition to ethylene, which have to be isolated, purified and markets must be found for them. Cracking ethane avoids co-products for the most part, but ethane supplies are limited.

A process to convert natural gas – consisting mostly of methane – to ethylene would have many attractions. Natural gas is usually much cheaper than petroleum (the present high prices are an anomaly), world reserves are larger, and it offers the prospect of a lower carbon footprint.

Unfortunately methane is a relatively unreactive chemical raw material and it needs energetic reactions to make it tractable. Using chlorine as a reagent is one way, and is the route to the chloromethanes and their derivatives. Reacting with oxygen to make synthesis gas is the main route to making chemicals from methane, with the syngas then used to make ammonia or methanol, or higher molecular weight chemicals via Fischer-Tropsch synthesis.

The 1980s saw attempts by many companies including Union Carbide and Arco Chemical to commercialise methane-based processes. The basic principle is to covert methane into a methyl radical by removing a hydrogen atom through oxidation, and allowing the methyl radical to combine to form ethane, or preferably directly to ethylene by working in a high temperature environment. The process is known as oxidative coupling of methane (OCM). The overall reaction can be represented as:

Siluria Technologies, a San Francisco based company, dealt with this by incorporating in the process design an ethane conversion section, in which ethane is thermally dehydrogenated to ethylene. This is an endothermic reaction which can absorb the surplus heat, while making use of recycled ethane, plus an external ethane feed if available. Siluria was bought by McDermott and incorporated into Lummus, which was then made independent, while Siluria is believed to have been acquired by Saudi Aramco.

A key feature of the process is the feeding of ethane and effluent recycle to a catalytic section of the reactor, using the heats of the exotherms to crack ethane to ethylene. 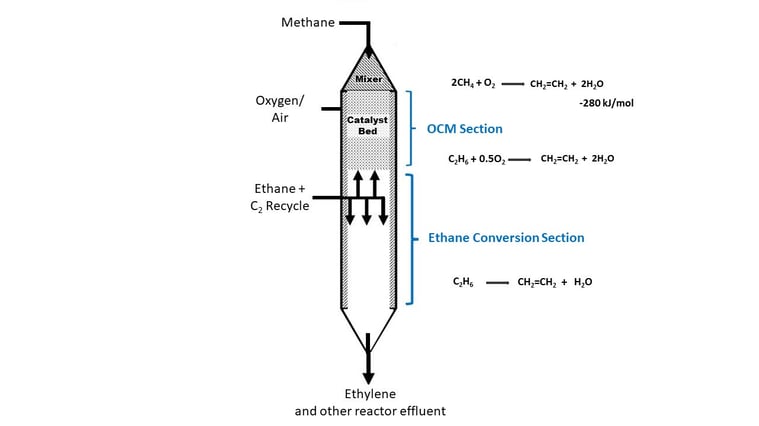 CO, CO2 and H2, are undesirable by-products, so they are separated from the effluent and are recycled to a methanation reactor, producing methane which is sent to the OCM reactor. The flow diagram below shows Siluria’s OCM to ethylene process. 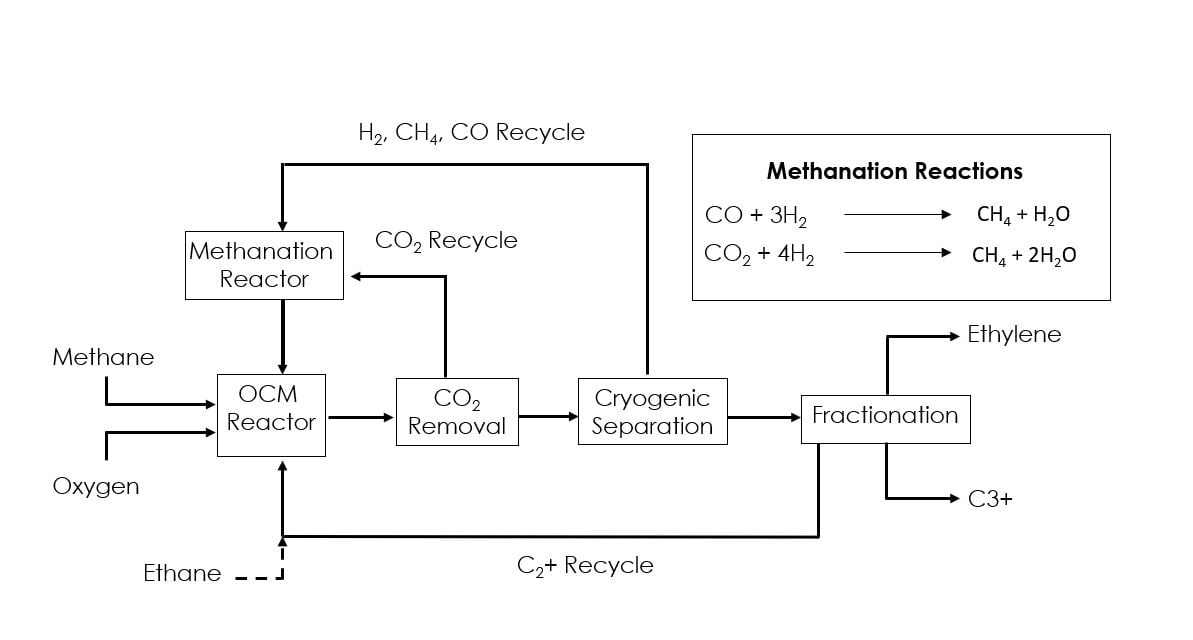 Feeding methane (CH4) into a reactor with an integrated air separation feature, the catalyst’s oxygen permeable membrane directly converts CH4 into C2H4. The research team, led by Fausto Gallucci, an Eindhoven University of Technology dean, claims the reaction occurs on a catalyst that is able to operate at low oxygen concentration.

The team focused on air separation through reactor integrated mixed ionic-electronic conducting membranes within a reactor operated at high temperature for OCM. By combining different process steps in a single multifunctional unit, the team sought to achieve much higher yields than with conventional reactors.

The consortium claims to have developed catalysts that are more stable under the reaction conditions than previously managed. Its membranes can also be used under reactive conditions. Galluci added that the project has involved the use of 3D printed catalysts.

Simon Jacques is the director at Finden, a UK-based analytics consultancy and Memere project partner. He said that with the Memere project partners, they have engineered a more stable and robust catalyst and with that combined with new catalytic membrane reactor design promises higher yields and more efficient industrial OCM process.

Given that reserves of natural gas are far higher than those of crude oil, and that the cost is very much lower (under normal circumstances) Tecnon OrbiChem’s founder and senior advisor Charles Fryer sees reason in the alternative.

“There's a whole market for liquid natural gas (LNG) which has been developed as a fuel. Back in 2019, we suggested that India should look at this. Since the country is going to be importing LNG anyway and is importing large quantities of crude oil, we felt that using LNG as feed to an OCM unit might be a better way for the nation to meet its major ethylene shortage.”

For an Indian ethylene unit based in part or wholly on imported feedstocks, OCM (LNG/methane) will be fully competitive at all crude oil scenarios with E/P (shale gas) cracking and very competitive with naphtha cracking - except at very low crude oil prices. 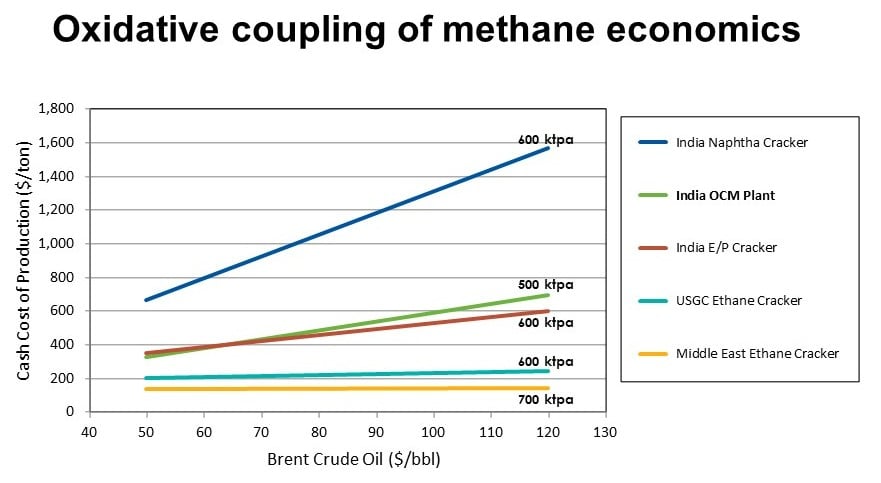 RENEWABLE MATERIALS AND THE FUTURE OF PLASTICS