Strategies key to the circular economy include circular supply chains, eco-design, reuse, recovery and recycling of resources. In Europe, the bioeconomy and circular economy are being combined to address the issues of climate change and resource consumption.

Within the chemical supply chain, the concept of a circular economy is growing in significance. Businesses are increasingly keen to promote their green credentials to eco-conscious consumers while meeting the growing expectations around Environmental, Social & Governance (ESG) values.

Furanics for example – which require a shift from petroleum refineries to biorefineries – will likely take decades to mature in terms of commercialisation.

The infographic below – from Germany's nova Institute – shows the entire value chain from cradle to grave, the waste hierarchy and the potential cycles for all raw materials. It also visualises how renewable carbon fits perfectly into the concept of a circular economy. When we talk about renewable carbon here, we mean chemicals and materials that use plant-based, waste-based, and other sources of carbon other than fossil carbon.

Integrating the bioeconomy into a circular economy

A circular economy is one that forgoes the traditional linear economic model of ‘produce-consume-throw away’ for one that uses the power of biotechnology, design for bioproduction, and machine learning/ artificial intelligence to create an economic system in which waste products and biobased products serve as inputs. Those inputs are then used to create highly valued products and materials, used as long as possible, and reused without drawing down limited resources or generating wastes that are disposed into the environment.

In Europe, circular economy and bioeconomy are being combined to keep carbon feedstock sources inherently renewable in the loop and to increasingly replace fossil-based carbon. The goal is defossilisation and not just decarbonisation. Embracing circularity will be characterised by the economic displacement of fossil-based feedstock, and replacement with biobased alternatives wherever possible. There will also be increased use of biobased material which is non-biodegradable but where the product can be effectively recycled at its end of life.

The use of biobased, biodegradable materials will increase where the risk of dispersion into the ecosystem is high – such as lubricants and disposable products. Biobased, non-food, waste-derived biomass feedstock will be used more frequently. These approaches are increasingly being promoted globally, and in Europe especially.

'... the mass balance approach makes it possible to track the amount and sustainability characteristics of circular and/or biobased content in the value chain...'

A well-oiled circular bioeconomy requires the initiation of tight collaborations and partnerships throughout the value chain. This is already happening between feedstock suppliers, the chemical and fuel players, the end markets and technology developers. In addition, sustainability initiatives are already tracked throughout the supply chain. 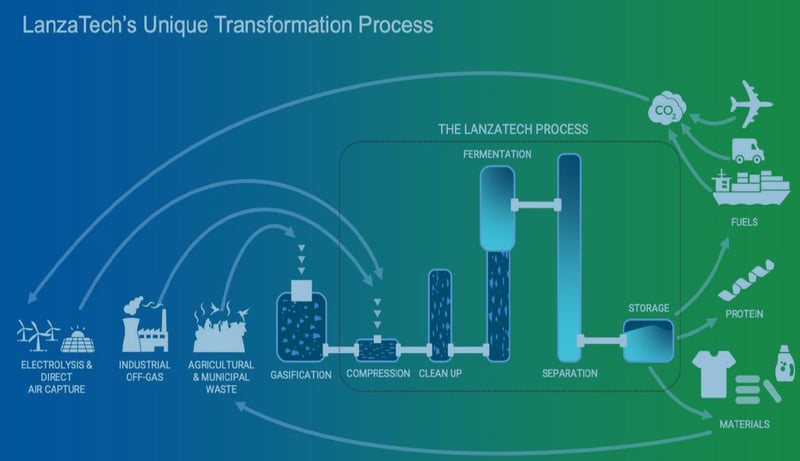 The infographic above introduces another case study on the use of a circular approach with waste-based feedstock. LanzaTech's gas fermentation technology converts waste carbon dioxide from industrial manufacturing, agriculture and municipal waste into various chemical intermediates.

The company's commercial production process is called CarbonSmart. A joint venture company in China – Beijing Shougang LanzaTech New Energy Science & Technology – uses carbon dioxide from a steel mill with LanzaTech’s gas fermentation technology to convert it into ethanol. That can be used as a fuel or as a feedstock for the manufacture of ethylene and its derivatives. The company also uses microorganisms to convert waste gas into n-octanol or butene or jet fuel.

'...Money will be a key factor; dialogue and partnerships, long-term strategies and plans, replicable case studies and bankable policies...'

This is an example of LanzaTech’s current downstream sector partnerships for producing various chemicals and products. For example, the US-headquartered firm has partnered with Coty to produce ethanol for fragrances and Lululemon to convert ethanol to monoethylene glycol as an intermediate in the production of PET fibres. Another example is the production of ethylene oxide as a surfactant raw material, which Unilever is planning to use.

The growing use-cases for LanzaTech's technology for capturing these greenhouse gases from pulp mills – or from biorefineries – presents the chemical industry with a great deal of opportunity. However, money will be a key factor. And it will take dialogue and partnerships, long-term strategies and plans, replicable case studies and bankable policies to get through this journey.

The mass balance approach is being applied in petrochemical processing as part of a circular bioeconomy. Certification and verification go hand in hand when we’re talking about mass balance.

This system is a way to slowly wean the chemical and petrochemical industry off its reliance on fossil-based feedstock. It is not perfect but it is not easy for the chemical, petrochemical and plastics industries to transition to lower carbon-intensity feedstock especially when there are issues with the sustainability of agriculture and forestry feedstock sources themselves due to deforestation.

Below is a simplified explanation on the use of mass balance approach in chemical production from Swedish specialty chemical company Perstorp.

Mass balance is being applied in the consumption of Crude Tall Oil (CTO), which is being used to co-produce naphtha via renewable diesel production. Finnish forest industry and paper mill company UPM supplies CTO-based naphtha as a mass balance feedstock in petrochemical steam crackers from companies like Sabic and INEOS.

With the mass balance approach, it is possible to obtain the same type of chemical building blocks as from a petrochemical refinery including olefins, aromatics, butadiene and butene.

The general consensus is that mass balance is here to stay, and will be especially prominent when chemical recycling is more fully developed. Petrochemical companies are using recyclate feedstock such as pyrolysis oil from waste-based plastics. Those brands are able to label their products as circular-based chemicals under the mass balance approach.

The pandemic has certainly further accelerated the digitalisation age. We see a lot more e-commerce usage in the chemical industry. Some companies are selling their biobased chemicals and products on their own website. Food processing and commodities trading corporation ADM is even selling biobased propylene glycol on Amazon.

And there are several chemical and agriculture companies now using blockchain for transparency and traceability in their supply chain. Meanwhile, startups and technology developers remain well-versed in social media communication and presentation. It is how they are being noticed by branded companies and environmental advocates. Ultimately, this will determine how their creations will end up being the products consumers turn to in a bid to live more sustainably.